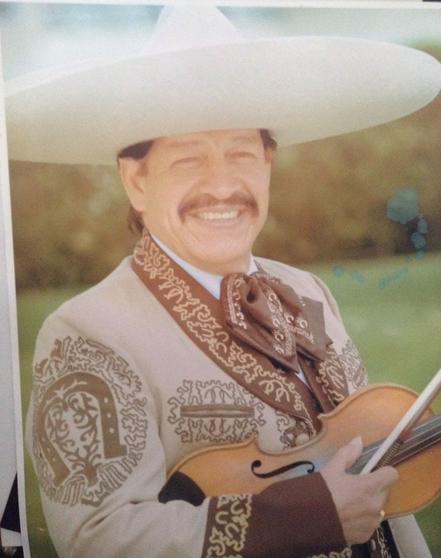 Julio De Santiago Mariscal, violinist, was born in Mexico City. He began his musical training with his father, Bernardino De Santiago, at the age of 9. He studied at the Escuela Nacional de Música de la Universidad Autónoma de México. He was a leading member of the Guiseppe Tartani chamber orchestra. In 1994, he joined Mariachi 2000 lead by Cutberto Pérez. As a member of Mariachi 2000, he was given the opportunity to perform with national and international artists including Luis Miguel, Pedro Fernandez, Leo Dan, Ana Gabriel, Joaquin Sabina, and Ricky Martin. Later in  2001, he suffered an attempted abduction in which he received a bullet impact in his spinal cord, preventing him from walking again. A year later, he resumed his career with Mariachi 2000 where he continues to perform. He also holds a position as a professor at  Silvestre Revueltas music school in Mexico City. 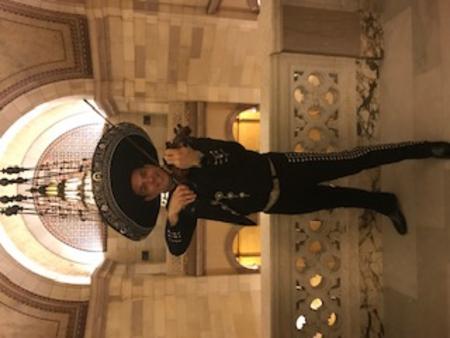 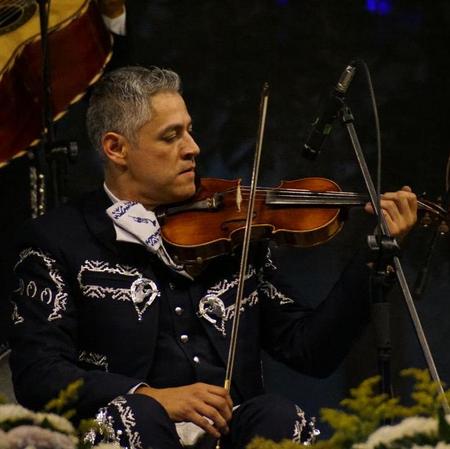 Ramon Parra (El Pato) was born in Zacatecas, Mexico on September 3rd, 1954.  He began playing guitar with his father at the age of eight.  Two years later he has his debut performing on television accompanying singers.  At the age of sixteen he began playing mariachi music with Mariachi Juvenil Guadalajara del Padre Romero.  With this group he started touring.  They performed at places such as  Million Dollar Theatre in  Los Angeles California.  They also  accompanied  people such as Julio Aleman, Las Hermanas Huerta, El Chelelo, Maria Duval, Beto El Boticario and many other Mexican celebrities.

Later, Parra join Mariachi Jalisco as a guitarist then switched to vihuela. Mariachi Jalisco was known for playing mariachi classics and classical music.  He has performed with many other well-known mariachi groups including Mariachi Los Toritos, and Mariachi Nacional.  With these groups he toured Russia, Holland, Germany, Munich, Israel, Japan and South America.

After playing with many influential mariachi groups in Mexico he was invited to come to the United States.   In many occasions he played with Mariachi Los Galleros de Pedro Rey, and Mariachi Oro y Plata de Pepe Chavez.  Parra also founded his own mariachi, Mariachi Tapatio de Ramon Parra, they would accompany Olga Brinsky in Las Vegas.

Throughout the years Parra has participated as an instructor in many conferences  in San Diego, Tucson and Albuquerque where he has been an inspiration to many young mariachi musicians.   He currently is a member of Mariachi Tlaquepaque in Guadalajara Mexico where he continues to be an influence to other mariachi musicians

Irineo Yañez is an accomplished musician and music educator from Los Angeles, California. At the age of 8, he began his music studies in Los Angeles Unified School District. Being from Mexican descent, both of his parents are from Jalisco, he grew up listening to mariachi music.

In 7th grade, he started learning mariachi music at the junior high school he attended. He went on to study music at the university level and received his Bachelor’s degree in music from Cal State Northridge, where he later received his teaching credential and masters as well. For the last 12 years, he has been teaching in the Los Angeles Unified School District as a music educator.

Irineo has been a member of Mariachi Los Reyes for eight years now, and has been given the opportunity to play alongside many other famous mariachi groups such as Mariachi Vargas and Mariachi Los Camperos. He has also been able to perform alongside many artists such as Alejandro Fernandez, Ramon Ayala, and several others. Yañez is very excited to be part of the 8th Annual USD Mariachi Conference for the fourth year in a row.